Lawmakers call for hearing on Afghanistan As the 20th anniversary of the Sept. 11 terrorist attacks approaches, communities across Colorado, home to several military bases, are memorializing the day in different ways.

Pagosa Springs emergency response and officials from Archuleta County are hosting a memorial 5K run at 7:30 a.m. on Sept. 11 at the Pagosa Fire Protection District Station 1 in Pagosa Springs. Registration for the run begins at 7 a.m. on Sept. 11. Following the run, there will be an emergency official vehicle cruise. The memorial service will begin at 10 a.m. at Veterans Memorial Park.

The North Metro Fire Rescue District, Broomfield Police Department, the City and County of Broomfield and the Veterans Museum Broomfield are co-hosting several events leading up to the 20th anniversary of Sept. 11, beginning on Sept. 8.

On Wednesday, “Finding Daylight,” a documentary of families who lost loved ones in the 2001 attacks, will be screened at the Broomfield Auditorium. The film will begin at 6:30 p.m. and finish at 8:30 p.m. Register here.

The Sept. 11 memorial ceremony will take place on Saturday at the Broomfield Amphitheater, and will include remarks by retired New York Fire Department Captain John Fatta. The ceremony will begin at 9 a.m. Following the memorial, the Veterans Museum Broomfield will host a presentation by Chaplain Andy Meverden at the Veterans Museum Broomfield, beginning at 11 a.m. At 12:30 p.m., the museum will do an encore screening of “Finding Daylight.” According to the North Metro Fire website, seating for this event is limited, so attendees are encouraged to arrive early.

Unity on the Avenue Spiritual Center in Denver will host a spiritual, omni-denominational ceremony on Sept. 11 from 9 to 10 a.m.. There will be talks from spiritual leaders of different faiths, former pilots, and law enforcement officials. People are able to attend the event held at the spiritual center or listen to an audio-only feed from the center’s garden.

The 2021 Denver 9/11 Memorial Stair Climb will take place on Sept. 11 at 1801 California St. in Denver. This event is only open to firefighters and the registration limit has been reached, according to its website. The event is limited to 343 firefighters, which references the 343 firefighters who died during the Sept. 11 attacks.

A waitlist is available.

According to the Brighton Standard Blade, Castle Rock residents who wish to observe a personal reflection on the 20th anniversary of Sept. 11 can stop by the two Sept. 11 memorials in Castle Rock. One memorial is located at Station 151 at the Castle Rock Fire Department and the other is at the Castle Rock Training Center at 303 Malibu St.

The Lone Tree Teen Court, an alternative for young respondents to the Lone Tree Municipal Court, was selected as one of the 60 communities to raise the official Sept. 11 Flag of Honor as part of the first annual 9/11 Flag of Honor Across America Memorials. The flag will have the names of the 2,983 victims of the Sept. 11 terrorist attacks. The event will take place at the Municipal Building in Lone Tree at 9 a.m. on Sept. 11.

On Sept. 11, the 2021 Colorado 9/11 Memorial Stair Climb event will take place at the Red Rocks Park and Amphitheatre in Morrison. The opening ceremony will commence at 8:46 a.m., which is the eastern time when the first plane hit the north tower in 2001. 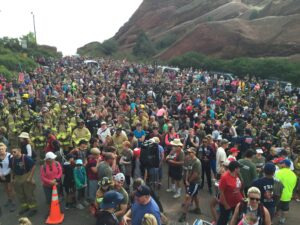 Due to rising COVID-19 cases, the event is limited to 1,200 climbers who register online. No onsite registration will be allowed this year. People age 3 and up are required to wear masks unless eating or drinking.

This is the 13th year Colorado has held this annual 9/11 memorial stair climb at Red Rocks, said West Metro Firefighter Shawn Duncan. The event is limited to 1,200 people due to COVID-19, to allow climbers to social distance on the stairs, Duncan said.

Climbers will do nine laps around the stairs outside the amphitheater, Duncan said. The nine laps is equivalent to 110 stories, which is what the World Trade Center was before it fell.

“We finish the climb that the 343 firefighters on 9/11 weren’t able to finish that day,” Duncan said.

We finish the climb that the 343 firefighters on 9/11 weren’t able to finish that day.

There are 50 stair climbs across the country this year, and all of the money raised by these events benefit the National Fallen Firefighters Foundation and the FDNY counseling services unit, Duncan said. While the maximum capacity for this year’s climb has been reached, people who still wish to support the event can do so by donating here. 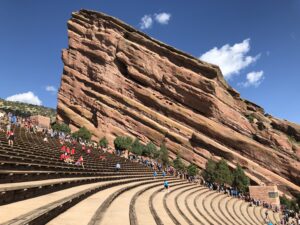 The Centennial Institute at Colorado Christian University is hosting a Sept. 11 memorial event and lecture of the Afghan War on Sept. 10. Kiron K. Skinner, a former director of policy planning and the senior adviser to former Secretary of State Mike Pompeo, will be leading the lecture.

The event will be held at the Anschutz Great Room at Colorado Christian University in Lakewood and will run from 10 until 11:30 a.m..

Praise Him Ministries is hosting ‘Rise Up’ on Sept. 11 at the Amphitheater at Las Colonias Park in Grand Junction. The event will include Christian singers such as Chris Tomlin and Jordan Feliz and a message from former Navy SEAL Chad Williams.

Prowers County and the city of Lamar are hosting a tri-state Day of Remembrance tribute to honor first responders on Sept. 11. The day begins with a parade at 10 a.m. to honor Bryson Schemahorn and Wayne T. Clausen, deceased Lamar residents. At 11:30 a.m., there will be a flag retirement ceremony. At noon, the city is holding a barbecue, which is free for first responders and members of the armed forces, and is $5 for everyone else. The formal tribute ceremony will begin at 1 p.m. There will be units from Fort Carson, Kansas, Texas, and Wyoming.

The parade will begin at Beech Street and the ceremony will take place at Lamar Colorado Fairgrounds. The Tri-State 9/11 Tribute Foundation has built a memorial one mile north of Lamar, adjacent to the U.S. Highways 50 and 287, according to Doug Harbour, a member of the 9/11 committee. 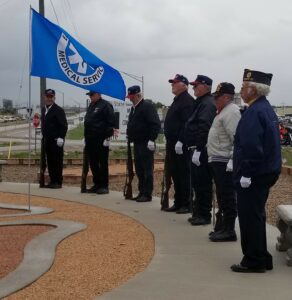 The photo was taken in 2020 at the recently completed Sept. 11 Memorial. Those in the picture are the Honor Guard from the local American Legion/VFW Posts. (Courtesy of Doug Harbour)

The event is open to the public and only parade entrees and vendors are required to register in advance.

Veteran’s PATH, a Colorado Springs organization that assists veterans who are transitioning to civilian life, is hosting a virtual, live-streamed event at 5 p.m. on Sept. 11 to provide a space for veteran healing, according to its website. The event will have guided meditations and a candle vigil. It is open to the public.

Virtual Run Events is hosting a 20th anniversary “never forget” virtual run, which is open to people of all ages. The run is 9.11 miles and can be done on any day in September. Registration is $25, which includes a medal and a bib. Twenty percent of the registration fee will be donated to Tunnel to Towers Foundation, which works to honor firefighter Stephen Siller, who died during the Sept. 11 terrorist attacks.

People who wish to observe a moment of silence in remembrance of the Sept. 11 terrorist attacks can do so at the following times, according to the Sept. 11 Memorial and Museum website. All times are in the morning in Eastern time:

Apple TV and BBC have released a documentary that shows the aftermath of the Sept. 11 terrorist act. “9/11: Inside the President’s War Room” focuses on the 12 hours following the attacks. The film is directed by Adam Wishart  and narrated by Jeff Daniels. According to Apple, the document will include never-before-heard testimony from government officials, including from former President George W. Bush and former Vice President Dick Cheney. The documentary was released in the United States on Sept. 1.

It is available to watch on Apple TV+.

In collaboration with the 9/11 Memorial and Museum, National Geographic produced a six-part series entitled “9/11: One Day in America,” which shows the events of Sept. 11 from the perspectives of survivors and first responders. The first part of the series was released on Aug. 31. The sixth episode “It’s all gone, kid” premiered on Sept. 3. Episodes are available to watch through various television providers, including Hulu and YoutubeTV.

Flags flown in Colorado will be lowered to half-staff on Sept. 11 in honor of the people who lost their lives in the Sept. 11 attacks. 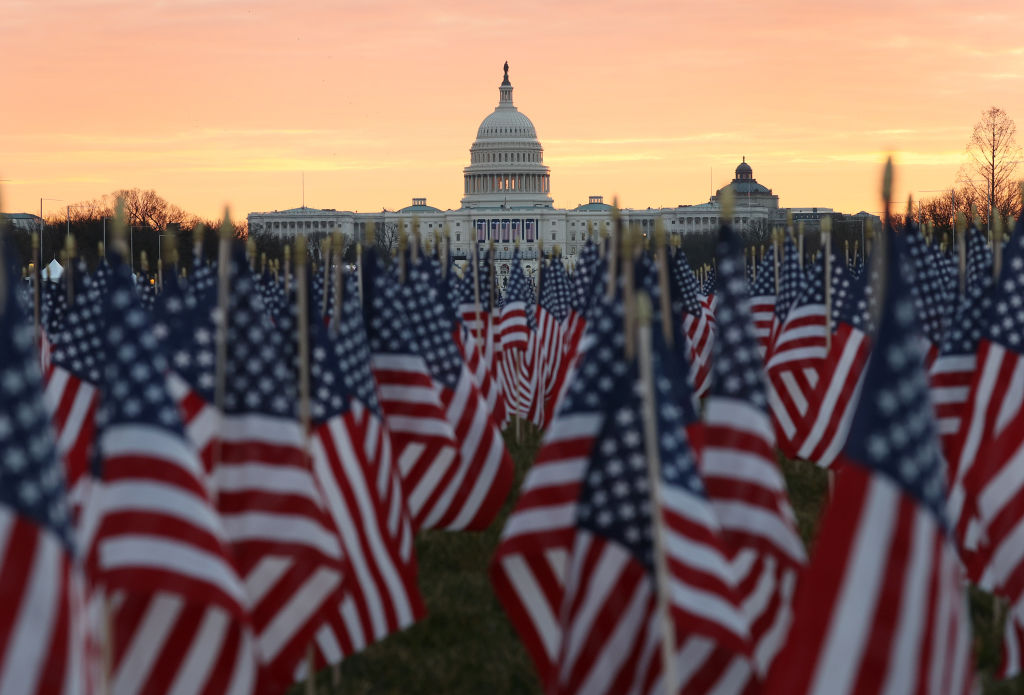 The U.S Capitol Building is prepared for the inaugural ceremonies for President-elect Joe Biden as American flags are placed in the ground on the National Mall on Jan. 18, 2021, in Washington, D.C. The approximately 191,500 U.S. flags will cover part of the National Mall and will represent the American people who are unable to travel to Washington, D.C., for the inauguration. (Joe Raedle/Getty Images)

On Sept. 11, 2001, 19 al-Qaida terrorists hijacked four airplanes, two of which were flown into the twin towers of the World Trade Center in New York City. One hijacked plane hit the Pentagon, and the fourth plane crashed in an empty field in Pennsylvania. 2,996 people were killed in these terrorist attacks, including the hijackers. Of the almost 3,000 people killed, 189 were killed at the Pentagon, 44 were killed in the plane that landed in Pennsylvania, and the rest were killed after the two planes flew into the World Trade Center.